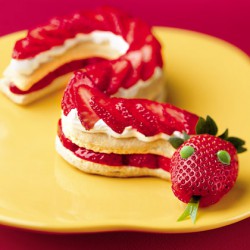 His Majesty's Dragon by Naomi Novik 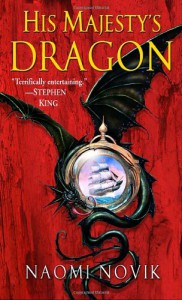 I received a free copy of this book through Goodreads First Reads. The following review may contain slight spoilers.

Several years ago, I bought my friend a copy of Empire of Ivory for Christmas, and that was my first brush with the world of Temeraire. I must admit it was unfortunately brief – I purchased the book at the store, wrapped it up, and handed it right over to my friend along with wishes for a happy holiday. That’s it. I remember her recommending the series to me enthusiastically, but at the time I had other books to read, other activities to pursue, and little interest in any encounter with history, even in fantasy.

Now, a little over five years later, I regret not having started on this beautifully crafted book sooner.

His Majesty’s Dragon is the first in the Temeraire series by Naomi Novik, a set of books based on an alternate, fantastical history of our world during the era of Napoleon. The main character, Laurence, finds himself the sudden handler of newly hatched dragonet, the unexpected prize after capturing an enemy ship that was carrying its egg. His new circumstances force him to leave the Navy and join the ranks of the aviators of the Aerial Corps. At first upset about this change, Laurence slowly finds his way in his new life and comes to appreciate his duties and his dragon, Temeraire.

Laurence is the perfect kind of protagonist, the kind you can come to love not only for his strengths, but also for his faults. His motivations and self-doubts are real, and when he commits himself to a cause, you find yourself just as committed. To prevent spoilers, I shall not describe in too much detail one realization that quite delighted me about his character growth, but I’ll say this: Novik is a brilliant writer, for she incorporates the change gradually enough to make it realistic, but makes it stand out enough so that when you do notice, you can more fully appreciate his character.

Temeraire, likewise, is a very enjoyable part of the novel. I shall not say much on him, for there are more spoilers there, but at least this: I found myself wishing often while reading that I were Laurence, so that Temeraire could be my best friend and partner. That was how real he seemed to me, even though he was part of the more fantasy-like aspect of the novel.

There are too many other good things about this book to spend a paragraph dwelling on each one: the clarity and elegance of the author’s style, the wonderful dialogue, the good inclusion of female characters even in a setting that might normally exclude them from pivotal roles, a well-developed world that blends history and fantasy in a unique way. I could go on for some time, and find little to criticize, but for now I shall step back and simply recommend His Majesty’s Dragon strongly to anyone who loves fantasy reads. You need only find your way over to page one, and after that I daresay the quality of the book can speak perfectly for itself.

I received an advanced reader's copy of this book through Goodreads First Reads. This review contains no spoilers.

I’m sitting here, reflecting over the past week, wondering how these last few days managed to disappear. Oh, yes, I remember now:

Red Rising by Pierce Brown. For once, I’d have to say that I did not devour a book. It devoured me.

To begin, I should first point out what is starting to become a new pet peeve of mine, not with new dystopian novels themselves, but with the way they are advertised. Which is by comparing them all toThe Hunger Games. Now, I liked The Hunger Games well enough, but let’s be honest here. This book didn’t just “channel the excitement” ofThe Hunger Games.

No. It sucker punched that excitement and launched it all the way out of this galaxy.

I felt a lot more excitement, a lot more emotion, a lot more power, a lot more depth in this one book than I felt through the entire series of any other young adult book I have read recently. It was a good story told for the sake of being a good story. Not just to feed the masses with the same things they have come to expect and therefore will pay for – cheesy, happily ever after romances or love triangles that magically sort themselves out, characters that go through hell and back without a scar to show for it (unless it adds to their attractiveness), and one or two life lessons that are told, not shown.

There are too many good things about this book to list them all one by one, so let me instead get right to why I've docked half a star. There are two main reasons. The first is no fault of the author – this type of book is usually not my cup of tea. Since I like the ratings on my bookshelf to be indicative of my tastes, I generally reserve five stars for only those books that feed my love of magic and dragons and steampunk. But then I thought about it and decided: hey, if an author can make a book so good that it drags me out of my literary comfort zone, then certainly I can make an exception and give it nearly five stars.

The second reason is that initially, I had gotten lost without a proper explanation of the Colors of the social hierarchy and the combinedWords that popped up all over the place. Especially the latter. I understand that authors seek to come up with unique ways to describe their settings without resorting to a dull item by item listing, but not all of the new vocabulary was easy to understand without at least a little bit of background. But I ended up not taking away a whole star for this because it is not yet a final edition, and also these little confusions did not diminish the power of the story.

Overall: wonderful characters, wonderful story, wonderful message. Something new and exciting for those who have gotten tired of the same dystopian formula that has recently plagued the young adult scene. Definitely highly recommended. 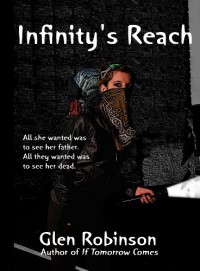 I received a copy of this book through Goodreads First Reads. The following review may contain, at most, the slightest of spoilers.

Let me begin with a dash of honesty – the reason, the only reason, I selected to enter the giveaway for Infinity’s Reach was because I saw ‘Baltimore’ in the description. Post-apocalyptic fiction, especially one with religious connections, is not usually my cup of tea. So the next day, when I found out I actually won, I was actually a bit disappointed. Why couldn’t I have won one of the shiny fantasy books instead? Surely this couldn’t be as interesting – I would probably be miserable the entire time I was reading it.

Infinity’s Reach is set in an America still reeling in the aftermath of a nuclear attack, with protagonist Infinity and her friends at first ignorant of the true state of affairs. Once Infinity’s eyes are opened to the truth, she begins her quest to find her father. Along the way, she’ll grow from a sheltered schoolgirl into a courageous and strong heroine, despite the many obstacles and betrayals she’ll face over the years of her journey.

I must say, I have rarely had a book so completely upset my expectations, in a fully positive way. I devoured – yes, the word is devoured, this goes beyond mere ‘reading’ – this novel within a day. I started in the afternoon, read for an hour, put it down, and regretted that action immediately. Couldn’t stop thinking about it. Wanted to know what happened next. Picked it right back up again. The pacing was perfect, the mix of flashbacks and present action ideal for giving just enough away to keep the reader excited, but leaving them craving more. Some books hold too much back, frustrating the reader in the process, but I am glad to say that this was not the case here.

Before reading this book I actually went and looked up the Wikipedia article on Pilgrim’s Progress. Naturally I was probably the one person in America who hadn’t heard of it. Let me tell you what amazed me the most about this book – I both knew what was going to happen, and yet didn’t know at the same time! I still don’t understand – how can someone manage to keep you guessing while presenting something that is at the same time familiar to you?

Along with the pacing and the suspense, I thoroughly enjoyed the characters. I found myself rooting for Infinity, her friends, and those who helped her along the way. I remember feeling disgust and disappointment with those who were against her and who betrayed her. I could experience these emotions clearly, because the characters were so real. Had their doubts, their weaknesses – saw their growth, their strength. Perhaps I shall pause here in my gushing and offer one point of criticism – it was difficult for me, at first, reading from Infinity’s friends’ point of view instead of Infinity herself. While I appreciate the change in perspectives throughout the book, I felt that Infinity should have had her turn earlier than the tenth chapter.

To recap, Infinity’s Reach is a book that defied my expectations, with a familiar yet unique premise, with a well-paced story and characters that will leave you unwilling to put the book down until you reach the end. No doubt about it – this book is one that I must highly recommend. 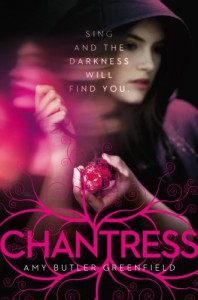 I received an advanced reader’s copy of this book through Goodreads First Reads. The following review may contain slight spoilers.

Chantress by Amy Butler Greenfield is an intriguing tale about a girl whose spell-singing powers lend her the special strength to be the saving grace for the people of England, while also putting her in grave danger. The protagonist and narrator, Lucy, is a likeable and realistic character, and as a result, it is interesting to see her interactions with the other characters as well as her progression throughout the story.

For her first teen novel, the author has done a good job in creating a plot with unique elements in a well-developed setting. The storyline is straightforward with minimum twists, which might frustrate readers who are looking for more than a casual read. The main antagonist and his underlings also do not make enough of an appearance to give him a truly villainous presence throughout the book – at times it felt more that the story was simply about Lucy developing her powers, with the defeat of the villain being only a final display of all that she has learned.

One of the more refreshing things about this book is that the pace, while somewhat slow, allows for a more realistic development of an aspect that is often overly emphasized or rushed in books like these – the romance. Lucy and her love interest develop their relationship in a believable way, leaving plenty of room for growth in future books.

Overall, the book does not disappoint. What it lacks in terms of a complicated plot is made up by a solid main character and good narration. While I may not be waiting on the edge of my seat for a sequel, I do look forward to the continuation of Lucy’s adventures.